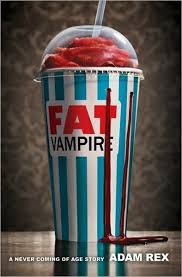 I wanted to like this YA novel so much.  I really enjoyed Adam Rex’s The True Meaning of Smekday.  While I don’t think the idea of the schlubby vampire or vampire life as boring and annoying is as revolutionary as some have said (see Catherine Jinks’s The Reformed Vampire Support Group, for example), I do think it hasn’t been done to death and has potential.   The first quarter or so of the novel didn’t let me down.  Doug, the titular fat vampire, and his best friend start the book by going to Comic Con and knocking over a bloodmobile.  A reality show starts hunting Doug and back at Doug’s hometown, a formerly internet addicted girl named Sejal arrives as an Indian exchange student.  The scenes are funny and the plot seems promising for a comic novel.

Then the story begins to hit a snag.  Doug turns out to be a complete jerk and when the humor slows down, it’s hard to enjoy him.  Sejal and her observations are interesting, but her purpose in the narrative doesn’t become clear.  Some mildly amusing plot detours, such as a trip to a Rocky Horror show, begin to bog down the story.  Then, what was originally presented as one of the biggest plot tensions, the reality show hunting Doug, suddenly disappears, making the book seem unanchored.  When the real villain finally emerges, I found him a little offensive.  I think maybe the author was trying to spoof the concept of the gay villain, or contrast it so we can see Doug’s homophobia, but I’m not even sure.  By that point, the book was all over the place and I was pretty much through with it.

Anyway, suffice it to say, I was disappointed.