Well, this week the boys were all full of maybe a little too much energy.  I’m sure that the fact that my two were about to be rushed off to an afternoon baseball game was a contributing factor.

We read a new book on energy: The Shocking Truth about Energy by Loreen Leedy.  I just love Loreen Leedy’s books about math and measurement.  This one is almost brand new so I hope she’ll do more books about science.  It was a great picture book. 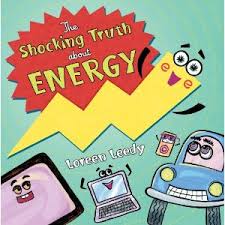 We updated our science notebooks by doing a quick energy scavenger hunt through some magazines.  Here’s BalletBoy and Mushroom’s examples of energy:

We focused on a couple of concepts.  First, the idea that energy can’t be created or destroyed, which the kids copied into their journals themselves.  Second, we used that to think about energy chains and energy transfer.  We began with a simple experiment from Janice VanCleave’s Energy for Every Kid.  We put some rice in a sock and attached it to a string, which we then taped to the table.  Below the table we put a can.  By swinging the sock, we could see how the sock transfered kinetic energy to the can, moving it across the floor under the table.  The higher we raised the sock, the more energy it put into the can.

Next, we talked about how most of our energy comes from the sun originally.  To think about this, we built a solar oven using these plans.  Because we were in a hurry, we’ll have to test it out next week.  Another homeschool blogger put up something about making s’mores in their solar oven and I thought, that’s totally what we’ll make!  I can’t remember who it was, but it was sure a good idea.  The kids are psyched to try it out.

Finally, I gave the kids a challenge.  I presented them with a box of materials and challenged them to see if they could get the kinetic energy to transfer more than 5 times by letting, say, the bowling ball hit the car, which could hit the marble, which could hit…  Well, you get the idea.  There they are below giving it try by testing different methods.  When we finished, we drew pictures of energy chains.  Hilariously, while we didn’t talk about this particular chain at all, BalletBoy’s chain showed the sun giving energy to the plant food, the person eating the plant, and the person’s poop giving energy to a bug!  I would have shown you a picture, but it was mostly blobs and a lot of oral explanation.