We skipped a week of science, but we’re back on track this week with heat.  The kids and I sampled the full range of hardcover nonfiction series book entries about heat from the library during the week.  They were okay, but as with all these sorts of books, nothing to write home about.  If I had to pick one that was worth looking at again, I’d say we got the most out of Heat by Sally M. Walker.  It had simple, easy to understand text and reasonable photos.  Oh, Let’s Read and Find Out series, why couldn’t you have had a book about heat?  You know you’re my favorite.

In the realm of more fun resources, I happened to find a copy of Horrible Science: Killer Energy at the thrift store for 60 cents.  Score!  So we read a little about energy and heat in there.  We watched the Magic School Bus crew try to insulate themselves and retain heat in the Arctic in an episode.  Also, as always, Bill Nye amused us with his antics.  Here, please feel free to get yourself over to Youtube to enjoy the parody song from this week’s episode.  I’m telling you, Bill’s making me miss the 90’s.

On to more important things.  With heat, I felt pulled in too many directions and I admit I had trouble distilling for the kids what they needed to know the most.  In the end, the information I think they got most clearly was that heat makes (most) things expand and rise.  Also, that some things conduct heat while others insulate.  I also introduced the three methods of heat transfer: conduction, convection and radiation.  We also did a good bit with temperature.  This was the first time my kids had been exposed to the Celsius scale, so that was an important thing to introduce.

We started this week by cooking up some s’mores in our solar oven.  The marshmallow got a little gooey and the chocolate turned to liquid, making them extra fun to eat.  Heat radiated by the sun sure isn’t heat radiated over a fire quality when it comes to marshmallows, but they were enjoyed by all. 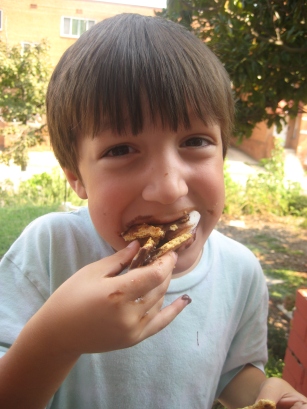 Then we moved on to a bunch of experiments and demonstrations about heat.  This was our first week of experiment flops.  Alas!  The first experiment flop was the trick with the cold bottle.  I’ve read about this one in several places.  You take a frosty, cold bottle and put a penny on top.  Then you use the heat from your hands to warm it up.  The heat should make the coin “dance” or even flip off the top.  Well, it didn’t work for us.  Another one that didn’t work was this one, which I thought had a lot of potential.  You can see the jars below all in a line losing heat…  well, aren’t we all losing heat?  But these jars are doing it for science!  I liked that the experiment allowed us to go through more of a scientific procedure by predicting which materials would insulate the heat best and explain the reasoning.  However, in the end, the results weren’t clear.  All the water lost heat at the same rate.  The temperatures were nearly identical in all the cups. 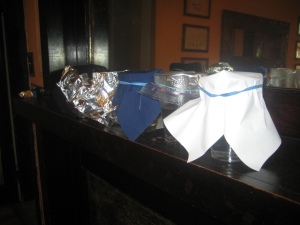 So, on to the stuff that worked!  First, I let the kids play with a bunch of thermometers: digital ear, meat, oven, alcohol and old-fashioned mercury.  Then, I had a set of alcohol thermometers and let the kids go put them in places of their choice to check the temperature.  We went around and checked them all: upstairs and downstairs, inside and outside, in the fridge and in the freezer.  We also put one right next to the solar oven and got to see how the brick of our stoop had reached nearly a hundred degrees!  However, once the sun went behind the clouds, we checked it later and saw it had dropped nearly ten whole degrees.

Another success was this basic experiment that illustrates that warm or hot molecules move faster than cold ones.  To further illustrate that idea, we moshed like hot water molecules then posed frozen with hands linked like cold ones.  Last, we did an experiment suggested in the Bill Nye episode where we put a small butter pat on a plastic knife, a metal knife and a popsicle stick.  Then we placed them all in scalding hot water.  Again, the kids got a chance to predict which butter pat would melt first.  When the metal one slid off into the hot water, we talked again about insulators and conductors. 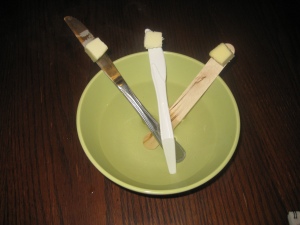 Of course, we also added to our journals with some new vocabulary words.  Then the kids ran off to play some game where I was accused repeatedly of being a jewel thief while I cleaned up the mess we’d left.