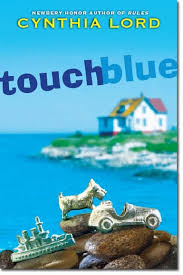 I just finished Cynthia Lord’s newest middle grades novel, Touch Blue.  Her last book, Rules, about a girl and her autistic brother, won a Newbery honor.  The issue Lord explores in Touch Blue is foster children.  The author gives us the beautiful and detailed setting of the tiny Maine island of Bethsaida.  She also gives us some wonderfully complex and real characters.  The family of Tess, the main character, has agreed to foster a child to improve the island school’s dwindling numbers and hopefully save it from being shut down.  However, Tess is superstitious and from from the moment her new foster brother, Aaron, arrives, he seems to bring bad luck.  Aaron is quiet and angry.  He isn’t the new brother Tess was hoping for.

In the end, things work out in a pretty predictable manner.  Like Rules, Lord manages to make her story transcend just being an “issue book” with solid writing and interesting characters.  The book really shines when she describes Tess’s love of boats and going lobstering with her father.  Children in families who have fostered kids will probably really identify with Tess and her sister emotionally.  However, while Lord doesn’t allow things to be tied up too neatly, but plot lines are still wrapped up a little too simply for my taste and Aaron doesn’t quite get his due as a character.  I know we’re following things from Tess’s perspective, but I still felt like something was missing there.  Overall, I enjoyed it, but I can’t give it the rave reviews I’ve seen others already give.