We dipped into forces and motion for a second week of experiments and readings.  This week, we hit the Bill Nye episode about momentum and read a couple of the nonfiction section’s lesser offerings on the subject, including the book Forces and Motion: Questions and Answers by Catherine A. Welch.  This is one of those books that only asks you really obvious questions with simple, straightforward answers.  I guess I’m glad we had extra books to flesh out our pile, but I wish more science books for younger readers would treat their readers with more respect.

But on to the fun stuff.  We began by reviewing Newton’s three laws in the simplest terms.  For their science journals this week, the kids drew an illustration about each law.  Here are BalletBoy’s below.  The first law shows an apple falling (until stopped by Newton’s head) and an apple staying still.  The second picture shows someone trying to lift a big pile of books versus a single book.  The third picture shows the card houses we made last week – in other words, two forces balanced against each other.

Then we did experiments to think about each law.  For the first law, we talked about inertia again and pulled a piece of paper from below a cup full of water.  In other words, more magic.  We did a lot of these tricks last week.  This time, we moved on after that one.  Taking that same cup of water, I put a layer of oil on top then put four drops of food coloring.  We took turns slowly spinning the cup on the table so you could see that the liquid resisted moving.  In other words, it had inertia.

Staying with the liquid theme, I showed the kids two eggs.  One would spin easily.  The other resisted spinning, but once you got it going, it was harder to stop.  The one that spun easily could be stopped with a tap, but the other one kept going even after you stopped it with a light tap.  The kids had various ideas about this.  We ended up weighing the eggs on the balance to show that the difference in their weights was negligible.  Finally, I let them crack open the eggs.  The easy spinner was hard-boiled.  The one that didn’t like to spin (and then didn’t want to stop) was a raw egg.  We talked about what made that one different.  Overall, I think this was one of the most successful experiments we’ve done so far.  The kids loved trying to figure out the mystery and had many great (if not correct) ideas about what made the eggs act so differently.

Next, we continued with liquids by exploring centrifugal forces.  The kids made little buckets out of paper cups and string.  Then, they made quite a mess in the kitchen. 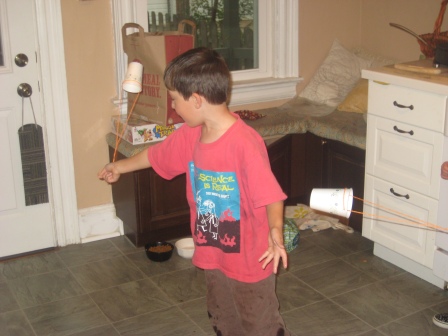 For the second law, we watched another Eureka video then did exactly what they talked about in the video.  We threw a heavy ball and a light ball.  I think, at least at this level, Newton’s Second Law may be the most intuitive.  The kids all know that heavy things are hard to move.  After all, they’re tiny and the rest of the world is huge.

For the third law, we did a classic experiment with a balloon taped to a straw and threaded on a string.  I tied the string to the easel on one end of the living room and the abacus on the other.  Of course, when you let the inflated balloon go, the force pushes it across the room.  This one delighted the kids.

So did playing with a gyroscope at the end of our experiment time.  The gyroscope did what they do and spun on the table.  We also watched an excerpt from the show Beakman’s World about gyroscopes.  The kids like that show much more than I do.  I find Beakman a little…  annoying.  Somehow when Bill Nye is manic on screen, it’s endearing, but when Beakman is, it’s just grating.  But hey, whatever works, right?