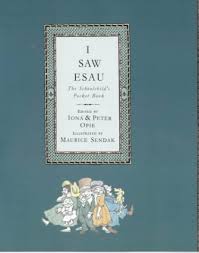 If you’re interested in children’s literature and children’s culture, then I hope you know the work of the Opies.  Their seminal work is The Lore and Language of Schoolchildren. Peter and Iona Opie attacked the subject of schoolyard chants like anthropologists studying a mysterious tribe.  They interviewed children as well as digging through old literature and references in order to follow jump rope songs and common taunting rhymes among British youngsters over literally centuries of change.  Iona Opie also gathered fairy tales and nursery rhymes.  One of her best known collections is I Saw Esau: The Schoolchild’s Pocket Book.  It was illustrated by Maurice Sendak and is still widely available.

Over the Thanksgiving holiday, I found a number of amusing treasures among my mother-in-law’s diverse collection of children’s books.  One was the book Favorite Rhymes from a Rocket in my Pocket compiled by Carl Withers.  This book was a thin paperback that was similar to I Saw Esau but with a much more contemporary American flavor.  It was published in the 1970’s, so as a child of the 70’s, I felt very at home with most of the rhymes it contained.  As I read through them, I found I knew the vast majority of them.

One of the things I wonder about is how, in this age of media, schoolyard chants and teases get conveyed.  I think they still must exist.  Are they more likely to come from television shows?  Do they begin as internet memes?  Do parents just teach them to kids?  I also wonder how much of their existence depends on having the sort of large community that comes with school.  Do homeschooled kids know these sorts of rhymes or pass them along?