I got seriously behind on science, in case you didn’t realize so prepare yourself for a mega-sized Science Friday post.  We do our science afternoon once a week with another family and the holidays as well as a million other things conspired to make us miss it for a long time.  The kids and I kept watching videos, reading books and exploring science informally, not to mention with one of our co-op groups, which has been pretty science focused, but it’s nice to get back to a proper sequence. 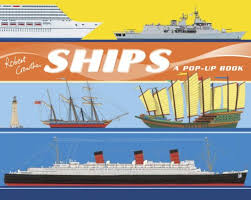 First up, our last class before the holidays was about floating and sinking.  As I somehow put off posting about it for so long, I don’t have much to say.  The Bill Nye the Science Guy episode about buoyancy is a pretty good one.  There’s a clip here.  There’s also a Magic School Bus episode about floating and sinking which isn’t bad.  We took out a number of books about ships, but none were especial standouts.  We happen to own the book shown here, which is a fun pop up book about ships that the kids especially enjoyed.  It’s nothing deep, but there wasn’t anything especially insightful at the library on ships either.

Floating and sinking meant a bunch of of activities trying to float and sink various items in a big tub of water.  I was pleased by how focused on scientific discovery we were that week.  Both our activities allowed the kids to test and discover.  First, we played an extended game of “Will It Float?”  The kids ran all over the house and picked out items to test.  They had to find two things they predicted would float and two things they predicted would not.  Second, I gave each of the kids a lump of modeling clay and challenged them to make it float.  This is a pretty classic experiment.  As a ball, the clay sinks, but if you mold it just right into a boat or bowl shape, then it will float easily.  You can see them working on it below.  To finish us off, I did this experiment where you float and then sink an orange by peeling it.  The discussion about why this works was a good one.

This week, we picked up again with the topic of flying.  This was an excellent one with lots of good book and video resources.  I probably won’t even begin to list all the excellent possible places you can look to learn about airplanes and flight, but I’ll try to give a sample.

First up, the Let’s Read and Find Out book How People Learned to Fly by Fran Hodgkins was excellent.  It was part history lesson and part aerodynamics.  We had a number of other books about airplanes, but we especially enjoyed The Airplane Book by Cheryl Walsh Bellville.  It was a little older so the “new” planes it talked about weren’t that new, but this book gave a succinct history of flight with photographs and explanations of the technological innovations through the history of flight.  It explained not only how older planes like the Wright Brothers’ flyer worked but also how jets and newer planes are different.  Plus, for any kids out there who are focused on specific models (that’s not Mushroom and BalletBoy, who couldn’t care less), this book gave a lot of specifics about different airplanes.

For videos, both The Magic School Bus episode about flight and the Bill Nye the Science Guy were excellent.  While the highlight of the Bill Nye episode for me personally is probably that the video parody is “Smells like Air Pressure” (no, really, it’s hilarious!), as always Bill summarizes the main points really well in this one.  We also found some great quickie Youtube videos, such as this one about how airplanes fly.  However, the best loved video for the kids was probably this one that I’m embedding below, which showed early, failed flight attempts then ended with footage of the Wright Brothers’ flyer at work.  It was funny, but we also talked a little about why these ideas didn’t work and why people initially thought they would.

Many of our activities were inspired by the Magic School Bus science kit Soaring Into Flight which we owned and did well over a year ago when it was fun, but difficult for Mushroom and BalletBoy to understand the concepts behind.  I kept the experiment booklet and drew from it for these activities.

We began, as we usually do, with our science journals.  The kids drew images of things that fly and showed them off to each other.  They also put down that air pressure is what allows airplanes to fly.  Then we highlighted four forces at work when an airplane flies: lift, thrust, drag and gravity.

Since air pressure isn’t something we can see, we explored it in a couple of ways.  First, we drank from juice boxes and explored how we could effect the air pressure in the juice box.  Next, using two ping pong balls attached to the table with string, we explored how blowing between the balls creates a low pressure area since fast moving air has lower pressure.  The balls move together if you blow exactly between them.  Even with a straw, BalletBoy had trouble aiming his air, as you can see below.

Next up, we explored drag with some classic parachute drops.  The kids each picked a different toy and we dropped all of them from the top of a tall step stool.  The Lego minifig worked much better than the stuffed animal Mushroom chose, by the way, so we talked a little about why that was.

For the next activities, we explored thrust.  First, we had a paper airplane contest.  The kids chose different models or made their own and we tested them to see which plane went the farthest.  We also went back to basics and talked a little about energy transfer and how these planes got their energy from us throwing them.  Then, we did an experiment that we did when we were exploring forces.  I strung up a long string with a straw on it through the house.  Then I blew up a balloon and we taped it to the straw and let the force of the air propel it forward.  The picture isn’t that great, but you can see the kids are trying to race the balloon through the dining room to the living room.  They wanted to do this activity half a dozen times, if I recall.

Our final experiments dealt with lift.  I gave each kid what I consider to be one of the best 75 cent toys money can buy: the wacky whirler.  I put a picture of it at the left so you can see it clearly.  You just twist, let go, and up it flies.   The kids played with them for about an hour outside.  Thank goodness it was a warmish day for January.  Below, you can see Mushroom watching his intensively, perhaps in the hope that it not get stuck in the neighbor’s yard and have to be retrieved by climbing over the fence like BalletBoy’s did!  (Shh…  no one tell the neighbors!)

You might think that was it, but we had the pleasure of going to the Smithsonian Air and Space Museum the following day, where we checked out the Wright Brothers’ exhibit as well as many of the old planes we had read about in the books.  Then, we saw a Discovery Theater puppet show about the life of the Wright Brothers.  It was a musical where they made the kids get up and dance.  Usually, that’s not my kind of thing, but this was extra well done.  I don’t think I’ve ever had a performance and museum dovetail this nicely with a lesson, so I felt like this made for an auspicious start back for science.

5 thoughts on “Science Week 10 and 11: Floating and Sinking and Flying”