On the one hand, I didn’t want to skip engines.  On the other hand, there was less in the way of actual experiments to do for this particular topic.  There’s just not so much you can get first graders to do with engines and cars.  Also, apologies for the lack of pictures this week.

Most disappointingly, all our usual resources failed us on this topic.  There’s no Bill Nye, Magic School Bus or Let’s Read and Find Out title about engines.  Since engines are such an omnipresent fact of life in our world, I found this a little surprising.  The best book I found on the topic was the book Car Science by Richard Hammond.  Much of the information was above the kids’ level, but glossy pictures always helps.  We also enjoyed a simple easy reader called Cars by Nancy Smiler Levinson, which told a brief history of the automobile.

Luckily, the online video resources for this topic were much more plentiful.  We found a whole bunch of great options.  The best video was probably the one from How Stuff Works that I’m embedding below, which used the simplicity of a potato canon to introduce engines.  Potato canons are apparently very funny to children, so this video went over very well.

We also enjoyed the video from Newton’s Apple, which is here.  You can also find some other good resources and activities there.  This video about the history of the automobile was also a good summary.  Finally, we enjoyed this demo of an old Watt Steam Engine.

We began by talking about what an engine is and what combustion is and writing down the definitions in our notebooks.  We brainstormed all the different types of fuel we could think of and I reminded the kids what we had learned about energy earlier in the year.  I was thrilled that they remembered that the energy in coal or wood originally came from the sun because they were originally plants making their own food.  Kudos to the kids for understanding energy chains.  To demonstrate fuels, I set a whole bunch of things we had around the house on fire.  We burned a candle, a small oil lamp, some paper, some wood, and I also demonstrated a lighter for them.  BalletBoy, who has apparently developed a recent phobia that I’m going to burn down the house, ran to take refuge in the kitchen.

I started the stove and we talked about natural gas a little bit.  We boiled a pot of water with the lid on and watched the steam escape from the pot and rattle the lid.  This worked pretty well to get across the idea that burning a fuel can start a chain that leads to movement.

Next, we talked about engines in our world and the kids cut out pictures of things that run on engines from magazines for their notebooks.  BalletBoy found a cool picture of a giant digging machine that makes tunnels in an old National Geographic. We talked a little about why engines are hurting our environment.  Finally, we went out and looked at the car and checked out what it looks like under the hood.

However, the most exciting part of the day was when we pulled out the Putt Putt Boats.  If you’ve seen the wonderful movie Ponyo then you’ll know what these are.  They’re tiny steam engines.  The boat sucks in the water, heats it with a tiny oil lamp or candle and then propels itself forward.  Despite the frigid weather, we set up a kiddie pool at our friends’ house and sailed the tiny boats.  As they go, they go putt-putt-putt-putt-putt, which is how they got their name.  The cold made it a short demo, but I’d like to take these out in the spring again and get them going on some real water, maybe in Rock Creek.  If you’re interested in learning more about Putt Putt Boats or buying one, you can find information here. 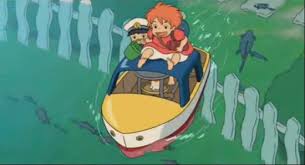