Sorry I didn’t get around to writing up science last week.  The reason was that I spent most of the time (or, at least, it felt like I spent most of the time) yelling at the kids, and not because the topic was sound and I wanted to teach them about raising your decibels.  The afternoon after science, it felt like it had been a colossal failure and my throat was a bit hoarse.

Well, turns out I was sick, or rather, pre-sick.  A couple of days later, the flu hit me like a ton of bricks, as they say.  Later on, I made a small list of all the stuff we had actually done that day and realized it hadn’t been a colossal failure.  It wasn’t a perfect science day, but it wasn’t too bad either.  Still, in the intervening time, my partner in science (the mother of the other two lads who take their science lessons with us), and I had a little talk, so next week we’re shaking some things up.  More on that next week, I hope.

But first let’s start off with some resources about sound.  All our favorites have good stuff about the topic of sound.  The Let’s Read and Find Out title, Sounds All Around by Wendy Pfeffer is perfectly fine.  “The Magic School Bus Inside the Haunted House” is also a good introduction to the topic.  Of course, the Bill Nye episode “Sound” didn’t let us down.  For additional videos, we found a couple of good options.  I especially liked this very old classic filmstrip video about sound, though it’s a bit on the long side.  The kids really liked this cartoon, which is incredibly short (you can find a link to the second part afterward though).  We also enjoyed this segment from NASA Connect, which has several short videos like it on various topics.

There are more experiments for kids with sound than you can imagine.  We had five books of just experiments out from the library, not to mention all the various experiments I found on the internet.  Sound is obviously a topic that can be easily explored in multiple ways by kids.  It can’t all fit into one day of experiments.  I tried to organize some of my thinking about ways to begin to explore sound.

The first concept to explore was that sound is a wave or a vibration.  We began by putting out hands to our throats and feeling that vibration.  The kids made different noises.  I had them slide their voices and they made their own noises and described what they felt.  Next, we tapped and banged various drums with paperclips on them to see how the vibrations on top of the drum can move something with very little mass like a paperclip, even when it seems like there’s no movement.  We plucked various rubber bands as well and watched them vibrate.  Finally, I had the kids make paper bangers.  You can find instructions for how to do it here.  I thought this was brilliant.  The origami was pretty simple, but the kids struggled to make theirs bang.  I could do it easily, but they had trouble flicking them just right.  Supposedly, these are much easier with newsprint, so I recommend doing it with the largest, lightest paper you can find.

For the final experiment with sound vibrations, we made a small sound cannon.  We used a coffee can and punched out a hold the size of a tennis ball in the metal bottom.  You can find alternate directions here if you don’t have a coffee can.  We hung small strips of tissue paper from the mantle and took turns firing our cannon to see from how far away we could make the tissue sway.  You can see BalletBoy trying it below. 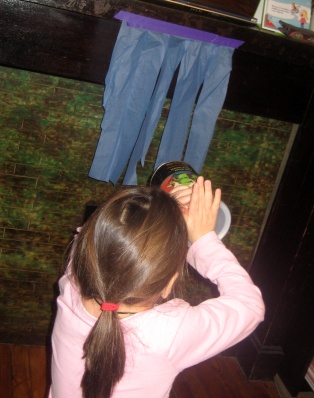 The next idea, I wanted to explore was how sound waves can bounce.  We made megaphones from stiff cardboard and played around with those for awhile.  Then the kids went around trying to make their sounds bounce even more by speaking them against different surfaces, such as walls, glass, wood, and metal.  We talked about how these are echoes. 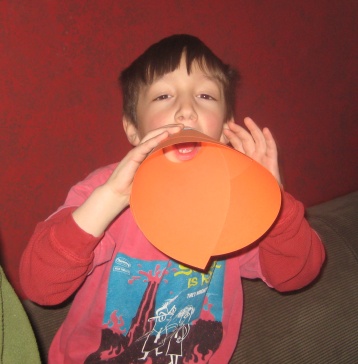 I wanted to follow up on that concept and explore how different materials conduct sound waves differently, but this was the point at which the afternoon seemed to be falling apart, so we didn’t really get there.  Instead, I decided to finish up with what I hoped would be the two most exciting activities.  First, we made a real, honest to goodness tin can phone.  It worked quite well – so well that I jumped back a little when I first heard BalletBoy’s voice through it.  We used nice kite string, which I suspect was an important component.  If you know nothing about tin can phones, here’s a simple set of instructions.

Finally, we did a version of this experiment, where you try to demonstrate that light (what we see) moves faster than sound (what we hear).  Mushroom stood more than halfway down the block with a balloon full of flour.  It decidedly did not work.  We saw the flour explode and heard the pop of the balloon nearly simultaneously.  I’m still working out how to counter the misconception that arose from that. 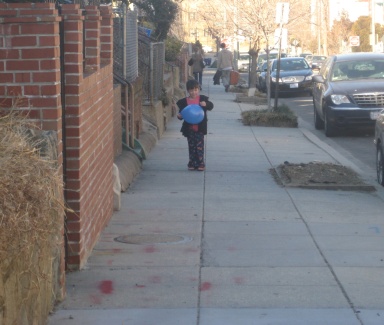