Hey, I finally updated the list of posts on the science page which is on bar above.  In case anyone was curious.

We spent a second week exploring electricity, though without the same depth as the first go around.  For this week, we looked at more complicated circuits.  We started by just looking at the light switches and I showed them the electrical box in the basement, which was more exciting than I would have imagined.  Then, we dove into real experiments, drawing again on the book Power Up that we used the week before.

We started with lots of extra “wires.”  Just like last week, these were just strips of foil lined with tape and folded over.  I put down a line on each end of the table in tape.  On one side, I put the battery and on the other, I put the little 2.4 volt bulb.  I told them to make the bulb light without letting the bulb or the battery cross the lines.  There was just enough foil wire to make it work and they got there after some experimenting.

Next, I left the bulb and the battery, but I took away more than half the wire and told them they had to do it again.  This time, they could go find anything they wanted in the house to get it to work, except more foil wire.  They had to get really creative.  They also had to remember how to test and see if something is a conductor or insulator. 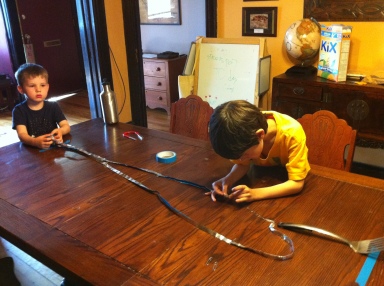 They had to get pretty creative to make it work.  They started with little chains of paper clips and then moved to scissors and finally raided the kitchen for giant spatulas and the like.  I had to show them to some tape to hold their crazy circuit together and we talked a little about insulation around wires.

After they had gotten it to light, we talked a little about how electricity is usually generated.  The Magic School Bus book about this topic was especially useful because it covers generators.  Then, we undertook a complicated project: building a tiny generator.  You can see the plans for this project here.  Essentially you use wire and wrap it around a big magnet, then spin it and make a teeny-tiny bulb light up.  I cut the cardboard and did more than one Radio Shack trip to get the materials (which weren’t that expensive).  Below, you can see them winding the wire. 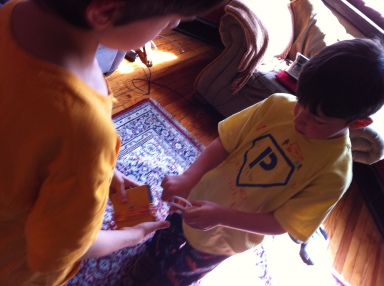 Well, cut to the chase.  We couldn’t make it work.  Grrr!  And then I was called out of town so I couldn’t really fiddle with it myself over the next few days to make it go either and I haven’t gotten back to it.  I feel like it was a really worthwhile thing to try and the kids were really into it.  It just didn’t work for us.  I’ll let you all know if we update it what the trick was.  I felt like I had followed the directions pretty well.  I guess if we’re ever stranded without electricity in some post-apocalyptic world, then I will not be the person building the generator.