I’ve been in full on reflection mode lately.  Thumbing through the portfolios, I saw where BalletBoy had set one of his goals at the very start of the year to read five books completely on his own.  He had done it and we listed the books, which, with one exception, were all picture books and easy readers.  Sometimes I get slightly frustrated because he’s not a super fast reader and he only rarely reads for pleasure outside of our silent reading time or when he’s stuck somewhere, like in the car, with nothing else to do.  But he probably read about ten chapter books in the same amount of time over the last month.  Just last week, he devoured a chapter book level graphic novel series (not a single graphic novel, but the whole four volume series) in less than a week.

Mushroom is also plugging along with reading and he seems to finally be getting the message that he can read (and therefore shouldn’t turn to his brother and ask him to read things for him!).  He still has that guessing tendency, but I’ve been working with him on it and he’s slowly improving.

We read silently every day (or nearly).  Usually, I read with Mushroom and let BalletBoy curled up in the big sofa chair and read silently.  But not always.  Occasionally, I read with BalletBoy and let Mushroom read alone.  Sometimes he’ll read something super easy, like a Berenstain Bears book or an Usborne phonics reader.  But often he’ll go get a cookbook.

That’s right.  My son reads the cookbooks.  The other night, it was time for the bedtime story (we were reading Edward Eager’s Magic or Not) and he didn’t want to put down his cookbook.  He sat up in bed reading it, planning an elaborate meal of small dishes for us that simply had to be carried out the the next day for dinner.  That’s why we sat down to an elaborate meal of salmon skewers, arancini (fried rice balls – he made the balls, I did the frying), and bruschetta.  It wasn’t his first big cooking project either.  His favorite meal to make is chicken tikka masala.  And there he is below hard at work on some Swedish meatballs. 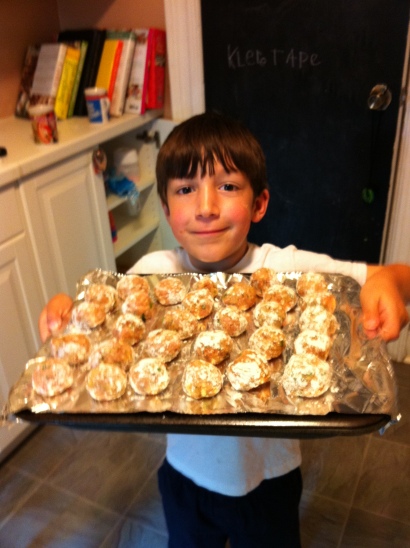 Usually, though, there’s not any actual cooking involved.  And he’s not an especially adventurous eater.  I can make him sound that way when I explain how much he loves chicken tikka masala, but really, this kid won’t even try mashed potatoes.

I think the main reason he likes the cookbooks is because he can “read” them during our silent reading time.  They’re more engaging than picture books for him.  But if he could sit down with a book and read it alone, I doubt he would have developed this particular interest.  That would have been a pity too.  I’ve been appreciating his ability to sit and focus on a book even without reading the words.  He appreciates books, so maybe the part where he has to read words doesn’t matter so much yet.  He’ll get there.

Above are some of Mushroom’s favorite cookbook choices.  Unless it’s my dessert cookbooks, he likes ones specifically intended for children best and you can see Annabel Karmel is one of his favorites.  A lot of children’s cookbooks don’t have any actual photographs of the food, just cute doodles.  Let me tell you.  That does not inspire a kid to cook.  We have checked out a lot of books like that, but they’re all just gone back to the library without any real use and once Mushroom “read” them once or twice.  Some popular titles, like Emeril Lagasse’s children’s cookbooks and standards like the Betty Crocker children’s cookbooks all used illustration instead of photos,which was very disappointing.  Williams-Sonoma and Dorling-Kindersley (DK) are the big exceptions.  They seem to have realized what a better look that is for a children’s cookbook.

Now, let’s see if he manages to save up for his own Easy Bake Oven.  He really, really wants one.

5 thoughts on “Of Reading and Cookbooks”