Well, this was a funny science week.  I had to host our Monday co-op and had my mom in town, all of which conspired to keep me from really getting focused on getting ready, so this will be a bit of a bare post.  We’ll probably revisit this topic a little (in fact, I know we will).  For now, all I wanted the kids to get out of it was two very basic ideas.  The earth is made of elements and we can see them in rocks.

There are so many books about rocks and minerals that I almost didn’t bother listing anything.  They’re all relatively good.  Some are geared toward beautiful photos and illustrations, along with a nice text, like the Smithsonian’s Rock and Gem.  Others are field guides, like the Peterson one you see above that we had.  There are a number of good independent reader books at all levels about rocks, the one above is a longer one, but there are a dozen others I saw.  The Basher book on this subject is fun, as always.  I especially liked that the Basher book clearly listen the chemical composition and hardness of each one for which it was appropriate.

One book we had which was more poetic than scientific, but which I found enjoyable to read aloud was the picture book If You Find a Rock by Peggy Christian.  Each page is a little photo of a child and a rock.  The rocks are things like “crossing rocks” for crossing a stream or “hiding rocks” for rocks with bugs hiding beneath them.  It was a sweet book and a balance to all the classification stuff we used above.  Older kids probably wouldn’t enjoy it, but we did.

Well, I don’t have a lot to offer you right now.  All we watched was the BrainPop entry on mineral identification.  However, we’ll be hitting this topic again, so if you’re interested, I’ll have more stuff later.  I just need to get to the organization stage.

I considered doing some activities with salt and even sugar.  I even went out and bought Epsom Salts.  However, after a long stretch of unseasonably cold, rainy weather, the sun came out for science, so I felt it was a crime to stay inside and I headed out instead to the creek down the road.

We collected rocks, compared rocks, looked for interesting rocks and found all kinds of rocks.  Then, I broke out a mineral testing kit much like the one described here.  The kids loved testing the hardness of their things.  Rocks that scratched the knife were especially exciting and our penny was quite marred by the end.  However, the most exciting moment came when Mushroom found a rock he described as a “chalk rock.”  Could it be chalk?  The hardness was right.  It fit the description.  Then we saw chalk had calcite.  We dropped a little vinegar on it and waited for a reaction.  This was perfect as a follow up to our study of molecules.  The acid in the vinegar breaks the molecules down, which causes a fizz.  After an intense minute of watching, little bubbles began to form.  It was chalk! 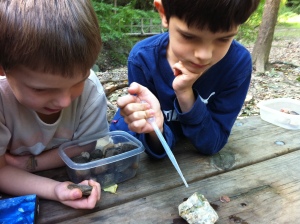 In addition, we found rocks we are pretty sure were sandstone, granite and mica.  Actually, I am sure that was mica.  Talk about cleavage!

After testing, researching and comparing, we drew the rocks and recorded our observations in our journals.

Oh, and did I mention that it was just nice to be playing at the creek.  A brand new tree had been uprooted by the rain and was fun to walk across. 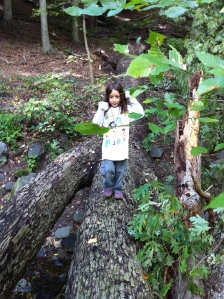