Since the boys were in kindergarten, we’ve done math on the white board or math on scratch paper or math with me scribing or math in workbooks or worktexts or with manipulatives. But when Mushroom reached pre-algebra this year I realized that what we had not done was math neatly laid out in a notebook. It was a mess.

However, I was patient. I gave Mushroom a special notebook for math to keep it separate for the first time from the rest of his written work and made him a special cover for it. Then I tried to instill in him to label the top of every page: the lesson number or “Scratch.” Then we got to simplifying expressions and I explained that you have to copy the expression at the start. He looked nigh on devastated. And the notebook was a mess.

But, hey, look at this! Just a month or so after starting to learn about how to keep his math notebook nice and neat, he did this: 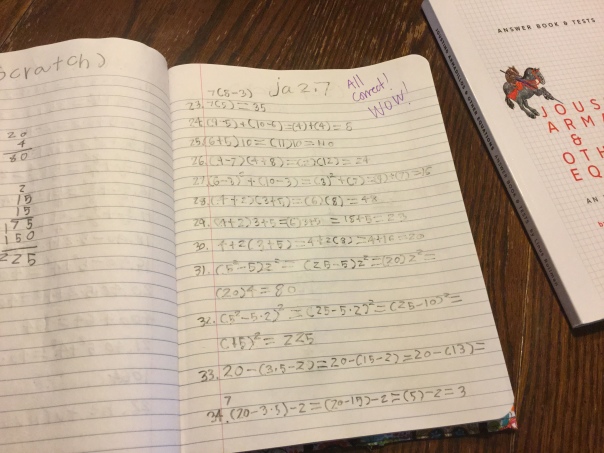 Math is so much about the process. However, there comes a point when the process is hurt by sloppiness. We try really hard to focus on what matters more than how it’s dressed in our schooling. So the quality of the writing matters more than the spelling, that you worked on art for an hour matters more than whether you ended up with a finished product, that you got the right answer matters more than if you forgot to write the units next to it. However, eventually, some of those things matter sometimes. I told Mushroom he had acquired a lifelong skill by being able to keep his math notebook neat and functional.

But I’m also glad I didn’t try to make him acquire this skill earlier. It was pretty painless at this point while it would have been difficult for him earlier. So I’m glad I waited for the right moment to worry a little more about how it looks.