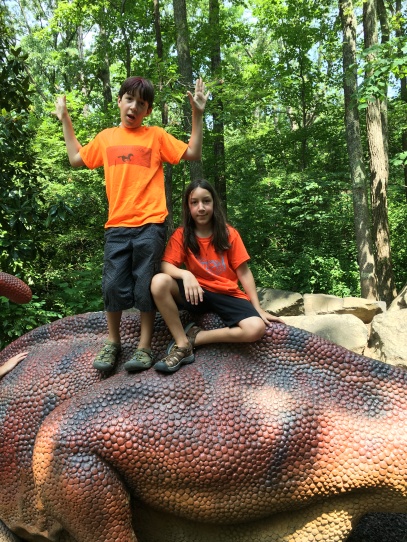 A sudden realization struck me not long ago. We are halfway there. The kids are firmly into seventh grade. We’ve passed the halfway mark on homeschool. Actually, if you include kindergarten, we passed it a ways back on the road, breezing past, minding our own business, not appreciating the scenery.

Will we do high school? It’s a question I get often lately and I admit that every time I see someone who is sticking with it so far, it’s first on my lips as well. It would have broken my heart to send the kids to elementary school, but I would have done it if it had been necessary. Middle school is not negotiable. No way can they go and now that we’re past sixth grade, if I were to die horribly tomorrow, I really hope the Husband would just keep them home and unschool them. Because I think it would be time better spent overall.

But high school? Right now, we’re in. BalletBoy is definitely in. Mushroom is maybe, probably in.

Everyone says that homeschooling is a marathon, not a sprint. I have given that advice myself many times. Don’t let yourself tire out, don’t overdo it, keep in mind that you’ve got time and it’s a long journey. All that good advice. I think we’ve mostly done it. There have been times I tried to sprint toward nothingness – toward reading too soon, toward better spelling, toward history books that were too hard. But mostly I think we’ve taken the right roads. We have just kept moving, kept doing something, not overthinking it too much.

And Mushroom and BalletBoy are mostly thriving. There are micro-things that I would love to change. When will BalletBoy remember to capitalize anything, even down to his own name? Will Mushroom ever be able to spell? Will BalletBoy forget how to do long division without be giving him the evil eye every single time he hasn’t practiced it for a week?

But the macro-things are mostly pretty good. BalletBoy writes lovely stories and is starting to write half decent essays. Mushroom dives into math with love and explains to me things in Mathematics: A Human Endeavor with a natural ease that is foreign to me as a math novice. Mushroom isn’t about to win any essay contests, but he’s getting more confident with writing. BalletBoy will be ready for Algebra I before the end of the year. BalletBoy has such a passion for dance. Mushroom is coaching a group of little kids for Destination Imagination. Mushroom likes to read now. Both of them are detail oriented and organized enough to carry out complex projects and make beautiful things. Both of them are kind and thoughtful and have interesting things to say. Sometimes they disagree with me.

It’s nice to take a moment to just say, hey, there’s still a long road ahead, but we’ve covered a lot of ground behind us. And we’ve done it mostly by being willing to just keep going and do something as we went.

3 thoughts on “Halfway There”