I just finished A Tale Dark and Grimm by Adam Gidwitz.  Why did I resist this book again?  I think it had something to do with an overdose of fairy tale re-imaginings.  Whatever the reason, I’m glad I went back and read it, because…  WOW.  Just, wow.

You know how A Series of Unfortunate Events started a trend of talking to readers, warning them that bad things might happen or that they should be careful with the book they’re holding?  Well, this book warns the readers too.  Only instead of something a bit sad, if comically over-the-top, happening to some otherwise good kids, this warning is serious.  If you keep reading, there will be blood, and a lot of it too.  There will be what amounts to serial killers and gruesome details about deaths.  Gidwitz takes the most dark, terrifying bits of the Grimm Brothers’ stories and brings them to life in his tale and he never holds back from the pain of it all.  Honestly, some of this stuff would make Stephen King cringe.  So don’t say the book (or this review) didn’t warn you.

However, it is a story solidly for kids and relatively young ones too.  The book is middle grades, not young adult, and I think the audience is definitely upper elementary schoolers.  Gidwitz is a writer more on the side of the kids than almost any other I’ve read recently.  The recurring theme of how corrupt and evil grown-ups are runs through the entire story and it never comes back around to re-evaluate that point either.  The plot twists and turns a great deal, but the set up is simple.  In a mishmash of the real Grimms’ tales, Hansel and Gretel are the prince and princess of a kingdom where their parents’ history leads them to a terrible plot against their own children’s lives.  They run away, first to the witch’s gingerbread house, but after that into several other re-imagined fairy tales, meeting violence and bloodshed along the way, mostly, but not entirely, perpetrated by those horrible grown-ups.

This is a story of actual darkness in the way the original Grimm Brothers’ stories were.  There’s no candy coating, yet the bloodshed isn’t gratuitous either.  And more importantly, the lessons aren’t simple.  There are a lot of transformations – people in monsters, souls into birds, and the like.  There are also a lot of journeys that are clearly at least as metaphorical as they are real.  In short, there’s a lot of meaty stuff to mull over for the serious young reader, especially when the ending brings the children back to face their murderous parents.

The book isn’t for everyone, but I hope those who would be interested by its dark story find their way to it. 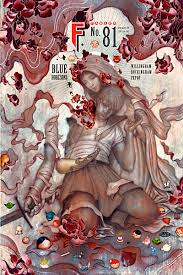