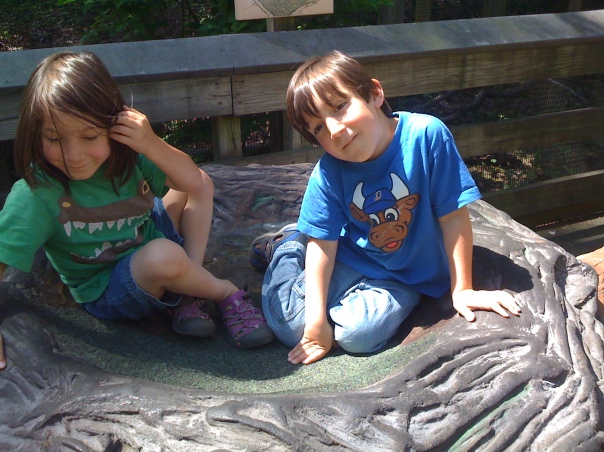 Back in the day, it seems like all we did was field trips. I think this is first grade. I think maybe it’s the Baltimore Zoo the year we had a membership there.

This topic has come up for me several times in conversations in person and online recently so I thought I’d post a little bit about how our homeschool has changed for me as the parent.

What I didn’t think much about was how long it would take or what it would be like for me as the teacher.  I think, when I thought about it at all, that I envisioned that homeschooling would slowly get easier and easier as my kids grew older and more independent in this great, simple arc.

Ha!  Not quite.  There have been some surprises.

When the kids were preschool aged and into kindergarten, our whole lives revolved around one basic goal: keep busy.  If we didn’t keep busy, then boredom could set in for all of us, me included.  As such, we went out all the time, every day.  It felt like we knew every playground in the city.  We spent so much time at so many museums.  We would drive anywhere for anything since the drive took up time.  We had constant crafts and projects and books and routines going.  It was hard to be out and about all the time, but it was even harder to be home with two preschoolers.

By the end of kindergarten and into first and second grade, something had shifted.  It was no longer the case that we had to go or succumb to complete chaos.  Now, the kids were just so much more self-sufficient.  They got up on their own, they made their own cereal for breakfast, they could play nearly uninterrupted for hours, and even at the park I felt no guilt leaving them to play on their own.  Our days became lazy, happy times where we often spent all day outside or on a trip or hike with friends.  School was short and easy.  It was rarely more than a couple of hours unless we had a big project to do.  I made more projects by coaching Destination Imagination and directing Shakespeare plays.  Life was just easy.

But then something unexpected happened.  By the end of second grade and certainly all through third grade, school got harder.  There was more to do, more skills to work on, more work to be done.  It took longer.  There were still long, lazy days outside and field trips and fun projects, but they were fewer.  That wasn’t bad, since they were traded for something new, more serious work.  I saw so much growth and the kids entered a stage when they were more interesting and fun to talk to, where they asked more questions and just did more in general.  However, it surprised me.  School just took a lot of my time.  We routinely had three or four hours a day, which was so much more than those kindergarten and first grade single hours.  And the kids needed me so much more than ever before.  This wasn’t the progression to independent kids that I had expected.

Now, as fourth grade begins to draw to a close (we’ll finish at the end of the summer and turn the calendar over in the fall), I’m finding a new stage in our schooling.  I leave for yoga in the morning or to run to a doctor’s appointment and I leave a list of work to do.  When I return, it’s done!  So school still needs me, but the kids can do so much more on their own.  They read, they write, they do math practice and piano practice and so forth all independently.  I can see this is only going to grow over the next couple of years.  Just as I had started to settle into the idea that schooling older kids simply took more time, it changed again.

I think now that how much homeschooling takes in terms of my time and what it will feel like to me – the busy time, the lazy and free time, the teacher intensive time, the supervisory time, the waiting time – will just change over time.  I don’t know what will come next entirely.  I think, obviously, there will be more independent work, but I also see that there will be times where the kids need to take risks or integrate new skills and to do that, they’ll need me closer at hand.  It’s not a straight line.