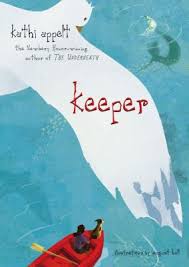 I got some good reading done over the holidays, trying to dip into a couple titles off the best of the year lists.  First up, the middle grades novel Keeper by Kathi Appelt.  This book follows a young girl named Keeper who has had one of the most disastrous days of her life, after ruining the special meal, not to mention the keepsake cooking bowl, that was supposed to be the moment when her neighbor finally proposed to her adopted mother.  First of all, let me just say that this may well have been the least linear children’s book I’ve ever read.  The story is fairly straightforward: Keeper is upset about her disaster so she runs away on her boat to consult her mother, who she believes is a mermaid.  However, the events that led up to Keeper’s disastrous day are revisited several times in different ways.  Appelt slowly takes us back and forth between the present of Keeper sitting in her boat trying to carry out her plan to fix things and various moments in the past.  We see not only Keeper’s story and the story of her adopted mother, Signe, but also the story of all the inhabitants of their little cul-de-sac on the ocean, including a number of the animals.  The perspective shifts from person to person (and to animal) and many events, such as Keeper’s disastrous day, Keeper’s birth, and the day Keeper’s mother left, are told repeatedly with new perspectives and snippets of information.  To add more layers into the mix, the history of the Texas coast as well as the mythology of mermaids is also explored in different ways throughout the story.

At one point, I thought the whole story might get bogged down by its complexity and repetition.  It’s not a short book and I began to worry as I read if the story could really sustain the twisty storytelling style.  However, Appelt’s poetic writing carried it through to the end.  It was a satisfying read.  Because of the mermaid element, I’ve seen the book listed as fantasy, but I think it would probably appeal much more to readers of realistic, literary fiction.  There’s a blurb quote on the jacket from Sharon Creech and I think fans of hers might really enjoy this book.