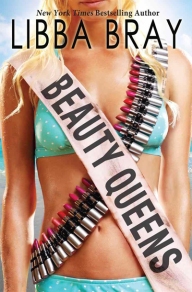 I have to begin this review by saying that I pretty much loved this book.  The story set up is basically teenage beauty pageant contestants crash land on the set of Lost…  I mean…  on a seemingly deserted island filled with mysterious and nefarious plots.  The remaining girls (you know, after a bunch of them violently die in the crash) have to learn to fend for themselves and survive.  The book is full of surprises, so, of course, the girls don’t turn out to all be vapid beauty queens.  Each one has a unique story and perspective.  In between chapters, Libba Bray gives us tidbits of various other things, including the contestants’ questionnaires, advertisements for beauty products made by the sinister Corporation, and reality show excerpts.  This is in addition to snarky footnotes throughout the text.  Readers should be forewarned that the book is decidedly YA, with a healthy dose of sex of all sorts, drugs and rock n’ roll from some lost reality show pirate bad boys.

If the story sounds absurd, that’s because it is.  It made me laugh out loud repeatedly throughout.  However, more than just being funny, the story is clever.  I like how Libba Bray takes the idea of empty beauty queens and brings us these fully fleshed out individuals who actually have something to say about what it means to be a young woman growing up in our society.  The way she explores ideas about sexuality is especially powerful.  She gives us one chapter that stands out in particular in tone, so much so that “the Corporation” has to come in after and rewrite it to make it more like the view of female sexuality that the media peddles.  That’s the sort of book this is, going from one tone to another, shifting from one character to another, throwing in everything but the kitchen sink and somehow emerging with a whole book that is hilarious fun but also gives you some deep thoughts to chew on.