I know I said I’d stop posting every project we did with Brave Writer’s Partnership Writing, but they all just turn out so darn pretty.  It’s hard not to.

We just finished this month’s project, which was creating a book about homophones.  They wrote sentences and drew pictures to show different homophones.  This dovetailed well with All About Spelling, since Mushroom is still stuck at the end of Level 3, learning about homophones and BalletBoy’s Level 4 also highlights homophones in many of the steps.  I let the kids mostly draw from their All About Spelling lists for these.  We also read some very cute books with homophones, such as the classics Amelia Bedelia and The King Who Rained.  I know these are usually read by younger children, but the jokes were much funnier now to my kids than they ever were when they were younger.  The best homophones book we looked at was Dear Deer by Joe Baretta, which featured an amusing set of animal themed homophones on every page.  Again, it was clearly meant for young kids, but both boys thought it was funny, especially since they were planning their own silly homophone illustrations.

We made our own books for this project as well.  I have some experience with making books, so we made up our own way, however, this set of instructions from Artists Helping Children is pretty similar to what we did and they have some other great book projects.  I have learned from years of book making with kids that cardboard often makes for a far too thick book (not to mention it’s harder to work with), so we used lightweight cardboard (specifically an old department store shirt box) instead for the cover.  It comes out more like a paperback that way.  If you’re interested in making books with kids and the above isn’t enough, Making Books that Fly, Fold, Wrap, Hide, Pop-Up, Twist, and Turn by Gwen Diehn is by far my favorite.  Also, this website is also really sweet and fun.

The results were really polished looking.  Overall, this was a pretty painless project and relatively quick.  With just a few pointers and direction, they actually did the finding homophones and then the writing for this one mostly on their own, plus the design for the pages totally on their own.  I did go over the sentences they wrote and corrected spelling, but otherwise, I left them alone.  They chose to write simple sentences, but that was fine.  There was a lot less partnership in this project.  I’m not sure if that’s them maturing as writing or the ease of the project (mostly the latter, I suspect), but it was really neat to see what they made.  I especially loved seeing Mushroom’s art for it, which was really well done and showed a great sense of space and perspective.

Since we learned about the monks who kept a sliver of Roman learning alive after the fall of Rome, I decided we should make books.  Making books is a former hobby of mine, so this was fun for me.  We used one of the projects from the book Making Books that Fly, Fold, Wrap, Hide, Pop Up, Twist, and Turn.  I have a couple of books about bookbinding, but even though this one is for kids, it’s my favorite.  The projects are spelled out very clearly with photos and drawings.  The materials are simple.  Even though the book tries to dictate a purpose for each kind of project, you can easily imagine different ways to adapt each project, as I did to make our books when we imagined being in the monastery. 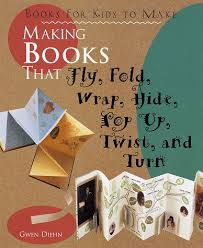 First, I cut two pieces of cardboard for each kid that was just slightly larger than a piece of standard paper folded in half.  The kids chose two colors to create the color.  The first color was wrapped over the cardboard.  We cut a triangle off the corners so it would glue down flat and neat.  Then the second color was used for the spine.  The kids cut that paper in half lengthwise then, leaving a space between the front and back covers, glued it on and folded it over to the inside.  You can see BalletBoy showing off his cover with a pink spine from the inside and the outside.

Next, we folded a small stack of standard paper in half.  With my help, we used an awl to punch five holes in the fold.  I helped the kids use dental floss to sew up the pages.

To finish the book, the kids choose two end papers.  They glued one side to the inside of the cover and the other side to the folio on the front cover then the back, attaching the folio to the cover.

Finally, I had the kids copy just one sentence from the bible.  I went with the 23rd Psalm.  Not my favorite bible verse, but I thought it made sense for kids.  I showed them how to make an illuminated letter and let them use the gold Sharpies, at great risk to my dining room table since they leak.  Then I let them use my calligraphy markers to write the bible verse.  They were impressed that the monks had to copy the whole thing, over and over again.  Also that the books were chained to the walls to protect them.  I told them if we had as many books as we do now back in the dark ages, we’d be bajillionaires.  If only it were the dark ages, kids.  I’d love to be able to make millions just by selling off the books.

After we finished our project, I told them they could do whatever they wanted with the books.  Mushroom immediately rewrote his bible verse in a blasphemous way.  It was very unintentional, so I find this pretty funny.  If you don’t, apologies.  The kid really didn’t know what he was doing when he inserted his own name in there.  Then he used the remaining pages to write a story about his beloved bath toys: Mary and the Frog.  The kids have been plotting out Mary and the Frog’s website empire for years, but apparently for now a book will do.