…that I’d Like to Recommend, but No One Ever Asks!

So, some of you may know that I spend way too much time on certain homeschool forums recommending books for peoples’ kids to read.  I don’t know what it is about recommending a book that makes me feel so good, but I get a special pleasure out of suggesting a book to a kid.  Clearly I missed my calling as a librarian, though I did get to fulfill this role back when I was a middle school teacher in my former life.

As I glanced at my shelves the other day, I realized that there are a lot of books that I really like, but that I never seem to recommend, mostly because no one seems to be looking for them.  People are always looking for read alouds and not-to-be-missed classics.  Historical fiction gets heavy play among the homeschool crowd too.  However, here are a few books I think I’d like to put into the hands of some kid, I just don’t know who.

Lost in Time by Hans Magnus Enzenberger
This middle grades novel is a strange one.  A boy looks into a picture and finds himself going back in time to the setting of the picture.  Again and again, this happens, taking the boy on a backwards trip through slices of European history all over the continent.  Each place has its own characters and issues.  But will he ever be able to find his way home?  The writing in this novel is sharp and compelling.  It’s in translation, by the way, since the author is German.  It’s a lesser known book of several years ago, but one that I really remember vividly.

The Adventures of Blue Avenger by Norma Howe
Another unusual upper middle grades or possibly YA novel.  It sounds like fantasy, but it isn’t at all.  The main character is a boy who changes his name to Blue Avenger, setting off a strange series of events involving a girl (with another unusual name) and the recipe for the perfect key lime pie, among other things.  The story is decent, but it’s the philosophical musings about the nature of our actions that really elevates this story.  I loved it and I feel like there’s a deep thinking 12 year old out there who would love it too.

Westmark, The Kestrel and The Beggar Queen by Lloyd Alexander
This middle grades series isn’t unknown.  Alexander is a Newbery winner, after all.  However, they aren’t quite fantasy and they aren’t quite historical fiction so somewhere I feel like they get lost in the shuffle.  The books follow a young printer’s apprentice named Theo as he gets caught up with the government and with rebels searching for democracy.  In the course of the series, Theo goes from being a young idealist to a bloodthirsty general and then to a man searching for moderation in the midst of a counter-revolution.  The nature of “just war” is explored, as well as many of the political ideas of the Enlightenment.  As I said, it’s almost historical fiction and would make a nice go-along for a student studying the first half of the 1800’s in European history or for any kid interested in war and politics.

Operation Redwood by S. Terrel French
I happened to hear the author read a snippet of this middle grades novel at an SCBWI conference awhile back.  The snippet was amusing, so I tried the book and really enjoyed it.  It was a sweet story of a boy who, after accidentally seeing an angry email directed at his uncle, gets caught up in trying to save a small patch of old growth redwoods.  The environmental message in the book is a little simple, but the story is solid and amusingly told.

The Neddiad by Daniel Pinkwater
This one might be cheating because I think I did get a chance to recommend the whole oeuvre of Daniel Pinkwater once.  If you’re not familiar with his works, Pinkwater is a writer of outrageous fiction.  This middle grades novel is as outrageous as any I’ve ever read.  It follows Neddie Wentworthstein (Pinkwater is a master of names) as he moves with his family to Hollywood.  There are ghosts, movie stars, aliens and a Los Angeles that has disappeared into glimmering history.  As with all of Pinkwater’s works, this is a book where one wonders who it can possibly be for.  However, it must be for someone.  Some kid with an equally outrageous sense of humor, who has graduated from Roald Dahl and needs something even weirder. 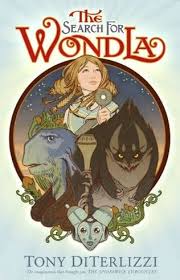 There are, to my mind, three types of books in the world.  First, there are the books not worth reading.  They may be wonderful for someone, they’re just not for me.  Then there are the books that are worth reading, but getting into them takes awhile.  It may be worthwhile effort, but it’s still effort.  Finally, there are those rare books where by page 3, you’re already enveloped in the book so deeply that you have to finish it.  These books don’t necessarily have the best writing (though it’s never poor writing), but author is a master storyteller.  I’ve read a lot of good books in the last year or so, but none of them were the sort that once I started, I just had to finish.  Well, thankfully, I just finished Tony DiTerlizzi’s The Search for Wondla and it was the sort of book that I barreled through at top speed.

First, DiTerlizzi’s illustrations are amazing.  They’re printed in green and black and really bring the story to life.  Each chapter begins with an illustration.  As I’ve said, good book design really enhances a book for me and this one had it in spades.  But the story is amazing too.  Eva Nine has always lived in an underground sanctuary.  She has never known any other people.  A robot called Muthr is her caregiver.  Muthr teaches Eva about the surface, testing her on things like how to survive a rattlesnake bite, so she can one day go up top.  Eva has only one item that didn’t come from Muthr, a fragment of an image of two humans and a robot with tiny fragments of writing that spell WondLa.  When Eva’s home is attacked, forcing her to the surface, she finds that it’s nothing like she’s been told.  She finds strange creatures like walking trees and water bears that her technology cannot identify.  She’s being hunted by another creature and must find friends and figure out why she’s there and what to do.

Wanting to understand the significance of WondLa and unravel the mystery of Eva’s life kept me interested up to the end.  I had my suspicions, but I wasn’t sure what was going on until the final reveal.  This was fantasy storytelling at its finest and it deserves to get the sort of maniacal fans that Harry Potter had.  Mushroom and BalletBoy aren’t quite old enough to appreciate it, even as a read aloud, but in another year or two they will be.  Something to look forward to other than just the next volume. 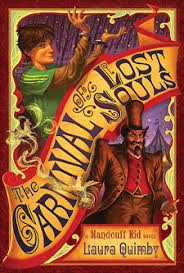 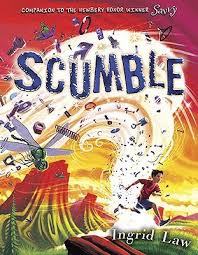 I’ve gotten a little behind on my children’s book blogging.  This is mostly because I’ve gotten behind on my children’s book reading and on reading in general.  Some actual adult books held me up and then I had a slight cold or a case of fall allergies or something and when I’m under the weather, I always just want to reread something.  But then the sequel to the middle grades novel Savvy caught my eye so now I’m back.

I didn’t love Scumble quite as much as I loved Savvy, but to my mind, Savvy was a near perfect gem of a book so it would have been a mighty tall order to exceed it.  Scumble tells the story of Ledger Kale, who acquires a very powerful savvy, or talent, on his thirteenth birthday: the ability to make things fall apart.  After some initial disasters on his way to visit his uncle’s ranch, Ledger sinks into a funk.  Sarah Jane (no, Who fans, not that Sarah Jane), a girl from town, adds complications with her outlandish tales and her discovery of Ledger’s family’s secret powers.

Ingrid Law weaves together a lot of characters and themes in the book.  In the end, Ledger has to scumble his savvy, or learn to tame his powers, so that he can go home and head to school in the fall.  Meanwhile, his uncle’s ranch, and with it, his family’s secrets, are threatened by Sarah Jane and her rich father.  I like books like this one, that have one foot firmly in reality and another one firmly in fantasy.  Overall, it was a very satisfying read.