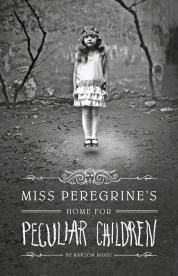 My last YA read was the unique book Miss Peregrine’s Home for Peculiar Children by Ransom Riggs.  It uses actual old photographs, collected by various people, as illustrations.  Many of these images show slightly fantastic things.  In the book, the photos belong to Jacob’s grandfather, who tells him wild stories about having grown up as a war refugee in an orphanage of children with magical powers.  As Jacob grew up, he stopped believing in his grandfather’s stories.  When the book opens, Jacob’s grandfather is aging and possibly senile.  He calls Jacob to help him because something, he says, has found him.  I’m hesitant to give much more away because the book takes awhile to reveal its mysteries.  It wasn’t until about halfway through, after Jacob and his father take a trip to try and understand what’s going on with his grandfather’s past, that things became clear (though most readers will begin to guess what’s going on, at least partly, before that).  At the start, it feels like a horror novel as Jacob seems to encounter a monster straight out of a B movie.  But as the novel progresses and reveals more, the tone becomes much more straightforward contemporary fantasy and much less eerie.

I had read a lot of raving reviews about the book so I suspected I would enjoy it.  I’m not sure if it completely lived up to the hype, but I did like it a lot.  It was well-written with a few very nice descriptions and some interesting characters.  The story was well structured, especially at the beginning, when Jacob’s mood and the mystery of what’s happening hang over all the action.  The use of old photographs was clever and Jacob was a realistic character thrown into a very bizarre world, which is the sort of story I tend to like.  There’s a very tame romance in the book, but some curse words and the general horror of the monster element makes the book firmly YA.  The book is odd, but I think readers who like an offbeat fantasy would almost certainly enjoy it.