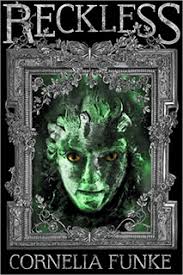 Another holiday read I tore through was the YA fantasy book Reckless.  I’m a big fan of Cornelia’s Funke’s.  We especially loved her middle grades book Dragonrider in our house as an long read-aloud.  I was curious to see how her writing would change when her intended audience was a little older.  In fact, there are some slightly darker themes and older characters in Reckless than her other works, but it’s very much recognizable as Funke’s style.

The book follows Jacob Reckless and his brother Will.  Their father had portal into a magical world where fairy tales are history instead of just stories.  He has been long missing, but Jabob has made a life there as a treasure hunter and general adventurer.  Unfortunately, he makes the mistake of bringing his younger brother along.  Will falls pray to a fairy curse that will turn him into one of the angry stone Goyl, who are fighting a war against the humans.  Along with Will’s girlfriend from our world and a woman who can turn into a fox, Jacob spends the book going to any length he can think of to save his brother.

Overall, I enjoyed it, but it’s certainly not my favorite of Funke’s works.  First, of all, I was far from enamored with the interior art.  It feels like even YA novels are using more and more illustration these days.  Sometimes, I appreciate it even if it’s not my totally my taste, which was the case with Behemoth, which I reviewed a couple of weeks ago.  And sometimes I adore it, as was the case with Tony DiTerlizzi’s The Search for Wondla.  Cornelia Funke apparently drew the pictures herself, but I found their dark, sketchy design mostly unappealing.  They didn’t seem to add anything to the narrative which made me wonder what their purpose was.  They also contrasted sharply with the thematically dark but very ornate and polished cover art, which seemed to represent the style of the book more clearly to me.

The story was obviously set up for a sequel, but there were still a whole lot of issues that were introduced but not followed up on.  In particular, Jacob and Will’s mother’s illness and their father’s mysterious disappearance.  We’re thrown into Jacob’s mirrorworld without much explanation.  Cornelia Funke lets the action and her interesting characters be center stage.  She doesn’t let us get bogged down in the whys and the history of the world she has created.  That’s good, but at the end when I went to reflect on the book, all I could think about was how much of the backstory I simply didn’t know.  Presumably she is saving that for future volumes, but I feel like I needed at least a little more up front.  Still, it was a good fantasy adventure read that I’m sure any fan of Funke’s would enjoy too.