BalletBoy has been writing up a storm lately. First there was a long story about a boy who traveled in time and literature to a mash up of Robin Hood and King Arthur. Then he got excited about sequel where the boy ended up with the Greek gods (though that one didn’t get finished). Next, seeing a 250 word spooky story contest, he knew he had to enter and immediately sat down to write something scary.

Well, it was scary. It was genuinely creepy. The main character finds himself in a creepy house while trick or treating. At first he thinks the doctor and nurse are just costumes and the lab is just decoration, but after seeing the patient seem to die on the table, he starts to think it’s real and makes a run for it. Two years later, in the hospital with a broken leg, the same nurse shows up. It leaves on a creepy, the nurse might be murder him right in the hospital cliffhanger.

I could never have dreamed that up in my wildest nightmares. But kudos to BalletBoy for such a spine-tingling horror story. Everyone in the house read it and agreed. It was actually a little terrifying. We heaped him with accolades.

“Can we revise it?” I pestered back. “Great writers all have editors. They all revise.”

“It’s excellent. But it will be even better once you revise it.”

He pouted a little but agreed and we set to work. This has been the biggest block for him. That’s pretty normal and I’m not upset. But I also want him to see revision as a normal part of the writing process and something that you just do. I showed him pages I’ve gotten back from my writing group, covered in notes. This is what professional writers get back too, I explained. He perked up a little.

I typed up the story and fixed the few spelling errors and mechanics issues. There weren’t many and he’s fine with me correcting that stuff. Then we printed out.

He chose a green pen for me and with the exception of two rewording suggestions, I just covered the whole story with questions. What was the main character thinking here? How was he feeling there? Why did this character do that? What did this look like? What did that sound like?

He chose a red pen for himself and went through it answering the questions that he wanted to answer. This is what it looked like: 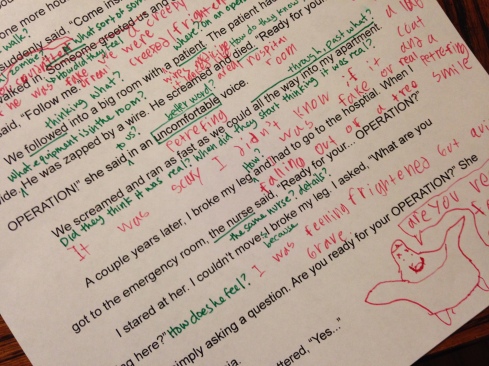 We took turns typing up his changes. And voila. He had a really solid story with more detail and therefore creepiness than when it started (he did have to cut it for the contest, but that’s another story). And even better, he felt really good about it. No tears. No anger. We’ve tried doing revisions together, we’ve tried cutting things apart, we’ve tried sticky notes, we’ve tried a few things, but overall this method of questions all over worked really well. Hopefully we’ll be able to use it again.

Now that we’re finally back to schooling, I had the kids pick photos from our Africa trip they wanted to write about.  BalletBoy chose to write about this picture of us about to zip line across the Zambezi Gorge. 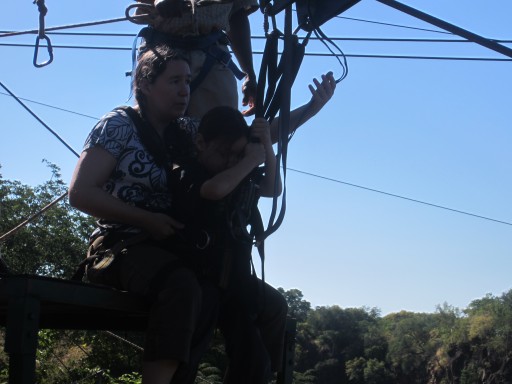 Here’s what he originally wrote:

one day in Zimbobwe we went on a zipline. it was not scary. It was really fun. you have to get in a jacket because the jacket cunexs to the harnes. it was amazing.

We still need to work on that capitalization, huh?  Otherwise, though, I’m so proud of his writing.  It’s readable, the spelling is decent, and it only takes him a few completely drama-free minutes.  The only thing he asked was how to make “really” say “reeeeaallly” and I suggested underlining.

However, he didn’t want to add a thing.  Not only that, but he was resistant to changing anything any of his photo freewrites.  As I didn’t give him a formula, he invented his own.  Every single photo freewriting he did began with some variation on the same phrase, “One day in Africa…” and ended with, “It was amazing.”  When I gently tried suggesting some alternate beginnings for some of the paragraphs he wrote, he said, “But, Farrar, I’m not writing that. I’m a ‘One day’ writer.  You know, one day I did this or that.”  Oh my.

So, trying to follow the Bravewriter system, I worked on revising it with him and we focused on adding details about the senses.  What did he see, feel, smell, taste and hear?  BalletBoy has never loved doing oral narrations.  Me clicking away on the computer as he talks is always an inhibiting distraction that he’s never quite learned to put up with.  However, he was much more okay with me writing on his paper with notes that he could arrange.  Here’s the revised version once we had corrected the capitalization and spelling together and changed just a couple of details:

One day in Zimbabwe, we went on a zip line across Victoria Falls. It was not scary. It was really fun. You have to get in a jacket because the jacket connects to the harness. I heard the waterfall and the river. It felt kind of like falling, but I knew I wasn’t. The zip line you hold is smooth and hard. I held it for the whole time. I heard a click that scared Farrar. It budged me to the side. I felt a breeze. I saw a little bit of the waterfall, the rocks, the shore of the river, and the other side of the zip line, which is in Zambia. At the end, the worker came down the zip line to get us. I’m glad I did it.

It still starts, “One day…” but it’s obviously better this way.  I think it’s rather good for a seven year-old.  He grinned when we read it at the end, so I know he felt proud too.