Welcome to a particularly video-linked heavy edition of our weekly science post.  I decidedly did not want to do science for that day.  Yet somehow it turned out to be a very successful science day.  Go figure.

Simple machines is a topic we had previously done with our co-op last year as part of a larger unit on tools.  Below, you can see Mushroom showing off his ride for “The Screw” on the day we did it.  The kids all made an amusement park for the little plastic figures based on different simple machines then played with them on the various rides.

There were plenty of video resources for simple machines.  First of all, we watched the excellent Bill Nye episode about simple machines.  Next, we tackled the Eureka! episodes from season 2, which dealt with the inclined plane, the lever, the screw and the wheel and the pulley.  As always, those were slightly complicated for the first grade set, but they enjoyed them nonetheless.  Less complicated was the Brainpop Jr. video on simple machines.  Most Brainpop videos are subscription only, but this one is free.

Next, as always, we did something in our journals.  We talked about how machines reduce work, which was very clearly covered in the Eureka! videos.  We looked for examples of simple machines in magazines and newspapers then labeled them.

Then, the real fun began.  We watched several videos of Rube Goldberg machines.  If you go to Youtube and search for “Rube Goldberg” or “Pitagora Suichi” then you’ll find a million of them.  Mushroom and BalletBoy’s favorite is probably this Easter themed one.  We also watched this amazing video from OK Go.  That video also has a TED talk about it, which is an inspiring little thing and fun to watch.  We finished by making our own Rube Goldberg contraption.  I told the kids it had to involve at least three different types of simple machines.  They chose to create something using the wheel, the inclined plane and a pulley.  They knew we were filming this and had already decided it would be their ticket to Youtube fame.  Thus, if you watch the video of their contraption, you’ll hear them screaming, “We’re famous!” when it finally worked.

A couple of resources to start you out for gravity.  First of all, the Let’s Read and Find Out title was Gravity is a Mystery by Franklyn Branley was a bit of a disappointment.  Unlike most of the Let’s Read and Find Out books, I didn’t feel that this one did a very good job at explaining gravity.  I’m not a scientist, so I really invite someone who understands physics better than I do to correct me if I’m wrong, but don’t scientists think they understand gravity reasonably well?  Why one object should attract another is never anything I’ve seen explained fully, but the basic concept makes sense.  However, this book kept insisting that scientists don’t even really know what gravity is.  The fact that gravity causes an attraction, not just to the earth, but also between all objects, was never mentioned in this book. 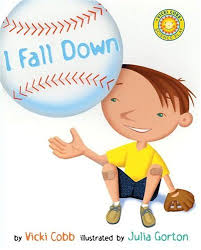 I much preferred the simpler, but useful book I Fall Down by Vicki Cobb.  I wouldn’t have minded this sparse picture book having a little more information.  However, it did do something very nice by warning the reader that you’ll need a number of household objects around to illustrate the concepts in the book.  I hate when I’m reading a science book that seems like it’s a text and it suddenly tells you to get up and do an experiment out of the blue.  It’s nice in concept, but sometimes I don’t budget our time for it or have the materials ready (even if it’s just a dishcloth or a scale).

My favorite book of resources this week was The Science Book of Gravity.  I’ve really been enjoying this series, which is from the early 90’s.  The experiments are all pretty simple, but focus on fun.  Not everything we’ve done from this series has worked, but most of the experiments have.  This week, I took nearly all our experiments from there.  I didn’t find anything simple for us to use from the Janice VanCleave book about gravity. 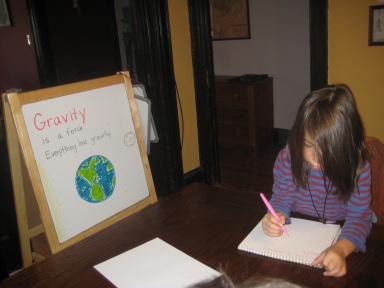 We began with an experiment that you absolutely must try, even if physics isn’t your topic this year.  I rank this among the truly excellent home science demonstrations I’ve seen in my life.  Here’s what you do:

Nothing we did topped that, but we did do a few other fun things.  We built a marble run to think about how gravity pulls us downward all the time.  We weighed ourselves.  We made a simple scale and “weighed” objects by hanging them on a rubber band and seeing how much they pulled on the rubber band.  We also dropped a large combination of objects and watched to see if they hit the floor at the same time.  We dropped some of them into modeling clay (though I realize now Play-doh would have worked better) to see what type of object made the biggest dents.

We enjoyed a couple of good videos.  First, the Eureka video on gravity was a good one.  I’ve posted about this series before, so I’ll just link to it.  You can see it here.  We also, of course, enjoyed the Bill Nye episode about gravity.  Finally, did you know there’s a Schoolhouse Rock video about gravity?  Well, now you do!

Finally, we did one last fun experiment.  Using modeling clay (this was really a modeling clay heavy week), we stuck marbles into one corner of a jar lid.  If you place the lid on a slope with the marbles slightly to the upper end of the slope, the jar lid with roll upward.  But it’s not defying gravity!  The marbles are the heaviest things and they need to go down the quickest way.  Anyway, three of our four lids failed because they weren’t flat on the edge, so make sure you have a completely flat rimmed lid for this one.  Below is a picture of the inside of one of the lids that did not work.  Alas.  But you get the idea. 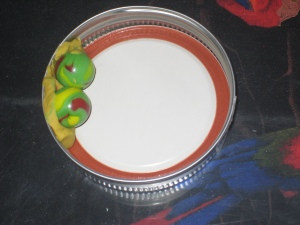 Last week, we headed out for a boat ride on science day.  What do boats have to do with friction?  Well, not nothing because I can think of connections, but mostly we just wanted to avail ourselves of the free boat ride before they expired.  We saw some blue herons, the edge of the Kenilworth Aquatic Gardens and the National Arboretum.  There’s Mushroom and one of his friends on the boat.

Then, we headed to the playground for some friction experiments.  My idea was originally to explore all the forces and motion concepts we had learned about by playing on the playground equipment.  However, this wasn’t the best playground ever, though we did have it to ourselves.

Next, we talked about friction.  I invited to kids to use a bag of stuff I had brought to increase the friction on the slide enough to stop a heavy wooden block from sliding down it.  They figured out a way involving modeling clay and strips of sandpaper.

I pointed out that sometimes you want more friction.  We all climbed up the slide to demonstrate that and checked out the friction on the bottom of our shoes.  However, sometimes you want less friction.  I pulled out a brand new roll of wax paper to show everyone.  Then, we all did the old trick of sliding down the slide on the wax paper.  My kids had never done this and it proved to be great fun.  If you don’t know this trick, get yourself down to the playground with wax paper.  The more you slide with the wax paper on your bottom, the more the wax rubs off the paper and onto the slide, decreasing the friction on the slide and increasing the fun.  I wish I had a non-blurry picture of the results of sliding down a waxed slide, but honestly, my camera’s not good enough for something that quick!

As an addendum to our science day, the other day Mushroom borrowed my fuzzy gloves at a playground so he could decrease his friction as he slid down some poles.  But then he didn’t take them off when he climbed to the top of the big metal climber and suffered a really severe fall, presumably because he didn’t have enough friction to hold on.  Luckily nothing was broken.  So, as a public service announcement, let me just say it’s important to know when you need friction and when you don’t.

Oh, and one more note!  I’ve added my name to a group of other homeschoolers doing “We Did Science Friday” blog posts.  You can check out the list at Rowing Downstream.  Reading on homeschool lists and blogs, it often feels like many homeschoolers struggle to find a time to give science its due.  I’m not sure what to say about that except that we love science.  Doing science isn’t as hard as you think, at least not for elementary schoolers – I wouldn’t want to presume for high schoolers yet!