The husband and I have season tickets to the Shakespeare Theater.  One of the perks of being a subscriber is guaranteed seats at the Free for All.  None of this line waiting or lottery business like the rabble.  This year, we used that perk to take the kids for the first time.  I admit I was nervous.  The show is Twelfth Night.  It was a lushly done performance that emphasized the comedic and romantic elements (over, you know, the spiteful revenge themes).  Rose petals dumped down on characters when they realized they were in love.  During the scene where the characters trick Malvolio into wearing those yellow stockings, I thought BalletBoy was going to die of a laughing fit.  So while there were some fidgety moments, I wasn’t sorry I took the risk and brought them.

Since we’re doing volume two of Story of the World this year, we should make up to studying Shakespeare properly by the end of the year.  I’m hoping to do a children’s production of The Tempest with one of our homeschool groups over the winter and spring.  We’ll see how that pans out.  In the meantime, I thought I’d share a few of the resources we used to prep the kids to go see a full length Shakespeare production.

We started with the Lois Burdett series Shakespeare Can Be Fun.  These books are short, picture book versions of Shakespeare’s works.  Most titles are available.  Each story is told in modern verse and illustrated by children.

Next, we used Marcia Williams’s More Tales from Shakespeare.  These are very short, somewhat silly versions of the stories told in a comic book format.  There is another volume called Bravo Mr. William Shakespeare and between the two they cover most Shakespeare titles.  I feel like these are a nice resource, but probably better for kids who can read them themselves instead of as a read aloud.

We sadly weren’t able to lay our hands on the Bruce Coville version of Twelfth Night, but his Shakespeare picture book series is one of the finest for younger children.  The illustrations are full page in most cases.  They have a beautiful, detailed look.  They help tell the story when most versions rely heavily on the words.  I lamented that our library didn’t have the one I wanted, but they do have many others, so I know we’ll use them later this year. 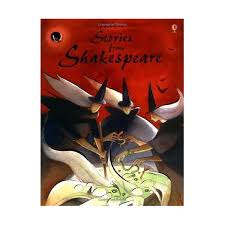 Finally, we own two different versions of children’s Shakespeare stories retold.  I know many people prefer the Charles Lamb’s Tales from Shakespeare, but I decided to get E. Nesbit’s Stories from Shakespeare instead.  The versions seemed simpler and more fairy tale-like to me, beginning with “Once upon a time…”  I also just have an affinity for E. Nesbit.  Her versions are available under many different titles, as they’re in the public domain.  Finally, I spied the Usborne book Stories from Shakespeare at a curriculum sale not that long ago and couldn’t resist the beautiful illustrations that went along with it.  The versions are more detailed than the E. Nesbit ones and are well-written.