Note: I usually try to avoid spoilers in my reviews, but I didn’t know how to address a couple of this book’s issues without a couple of reveals.

Another holiday read review to catch you up.  The Explosionist by Jenny Davidson is a YA  novel full of mystery and intrigue.  The setting is an alternate 1939 Scotland, where Sophie, a teenager at boarding school, becomes embroiled in a murder that is connected with a series of explosions and a plot to trigger a war between the northern Hanseatic states and the rest of Europe.  There’s a romance in the form of Sophie’s friend from Denmark and a sinister plot involving a dark organization founded by Sophie’s aunt that turns young women basically into emotionless automatons.  I keep seeing this, along with the recently released sequel, Invisible Things, classified as steampunk, but while it’s thoroughly in the alternative history camp and there’s certainly a lot of unusual science going on, it lacks the feel that other steampunk I’ve read has.

This is a very mixed review I’m about to give.  On the one hand, I really enjoyed the book and I even sort of tore through it, which is always a good sign.  The mystery was compelling and the alternate timeline and science are the sort of thing I like to read about.  Many of the things about the plot were tied in well and the writing isn’t too bad either.  On the other hand, the book has a great many flaws.  First and foremost, the moral issues in the book are far too black and white yet the writing seems to suggest that perhaps turning girls into automatons is somehow justifiable, as if Davidson is exploring an actual moral issue.  Sophie’s young musings on killing and nationalism are similarly shallow.  That’s not unexpected for a 15 year old protagonist in a YA novel, but the book makes much more of them than is needed.  It’s difficult to believe that in such an oppressed, controlled society there would be so little sense of moral discourse or awareness of the oppression.  As well, when Sophie is offered a possible way out from becoming one of the emotionless automaton girls, it’s difficult to understand why she spends chapter after chapter hesitating and nearly doesn’t act because of a misperceived slight from a boy she likes.  Is this her life in danger or not?  Finally, the book seems to waiver strangely on the existence of spirits.  Early on, the reader is let in on the fact that the supernatural is probably real, but Sophie’s attitude strongly suggests it isn’t, which makes you think that it’s probably a bit like our own world – with sketchy evidence for paranormal but some believers.  Midway through the book, it becomes clear that in the alternate world of the book the supernatural is almost irrefutably real and even more understood than was implied earlier, making it difficult to understand why anyone as intelligent as Sophie would be as dismissive as she was.  As with some of the moral issues, I felt misled by the narrative.

Essentially, I think anyone who finds the basic concept of the book as interesting as I did may actually enjoy it, but I don’t think I can really recommend it per se when it has so many issues.  Basically, I’m disappointed.  I had read some positive blog reviews and I wanted to just love this.  For a different take, try Bookshelves of Doom‘s review or Finding Wonderland‘s and you’ll see why I wanted to read it in the first place. 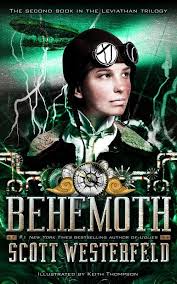