And we’re back with forces and motion for science this week!  There are so many different ways to approach this topic.  We began, as we always do, with a pile of books.  The highlight was, as always, the Let’s Read and Find Out title, Forces Make Things Move by Kimberly Bradley. 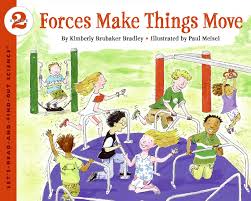 However, we had another excellent title with the DK title Can You Feel the Force? by Richard Hammond.  That one began with a joke about THE force from Star Wars which really made the kids smile.  Ah, it’s the simple things that hook them, isn’t it? 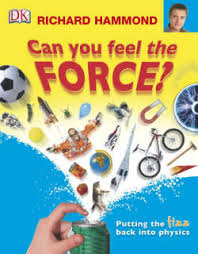 After all that, I decided to focus on a couple of things.  We introduced Isaac Newton and his three laws.  Then we looked at the concepts of equilibrium and inertia (aka, the first law).  We’ll probably keep exploring those ideas in the next week or two, as well as adding new concepts.

The kids began by looking for ways to use force around the house.  I had each kid find a push and a pull they could demonstrate to the rest of us.  In the saga of how I’m continuing to figure out great ways to use our science journals, I snapped a quick picture of the kids demonstrating their pushes and pulls then printed them and taped them in the journals where they labeled them.  It worked very well.  Below is Mushroom showing us a push with the wheelbarrow.

And there he is pulling the string for the blinds.

Next we tried an experiment from the book Science Experiments with Forces by Sally Nankivell-Ashton.  We put things of various weights into a small box with a rubber band attached to measure how far the rubber band had to pull.  The measurement aspect was fun and it was nice to have a table to put into our science journals.

To introduce Newton’s laws, we turned to a video.  This was a very video intensive week.  Some of our videos are embedded below, so I hope you can click and enjoy the miracles of Youtube.  Here’s the first one, a Lego Sir Isaac Newton.  I can only hope my kids’ legomation gets as awesome as this kid’s.

And in case you just need a Bill Nye fix, here’s the parody song from the episode we watched.

To think about some of the concepts in Newton’s laws, we first started to explore equilibrium.  We used the balance that usually gets used for math to show off the idea of forces being equal.  Then we built card towers.  Next we had an excellent tug-of-war in the basement.  The kids tried some arm wrestling at the table.

Finally, we repeated the experiment BalletBoy got to demonstrate at the science show at Discovery Theater a couple weeks ago by hovering a ping pong ball with a hairdryer.  The kids loved it.  There’s BalletBoy showing them how it’s done.

Next, we began thinking about inertia by watching yet another short video, this time from the old Canadian show Eureka.  If you’ve never seen this show, it’s dated, but very cool and all available online in multiple locations.  This show has an odd feature in that it spends a full minute and a half talking about the other episodes, which is sort of off-putting for a 4 minute short.  Start your viewing at about 1:25 to see the actual show.

To demonstrate inertia, we did the trick where you pull a card from under a coin and a cloth from under a bottle.  The kids loved practicing it.  Then (and no one freak out) when we next got in the car, I demonstrated inertia by starting and stopping more abruptly than usual in the empty alleyway to let the kids feel their bodies go back and forth.  Two of the passengers thought this was great fun.  The other two clearly perceived that I was going to get them killed if I drove that way on the actual road and warned me never to do it again.  Such responsible youngsters.