Okay, I promise, my last gushing review of Brave Writer’s new Partnership Writing, but we really did have such fun doing the first project about secret codes.

I checked out several secret code books from the library.  For the most part, they were all the same, just from different eras and with slight variations.  We found Top Secret: A Handbook of Codes, Ciphers and Secret Writing by Paul B. Janeczko to be the most useful.  I liked that there were anecdotes from history about secret codes, several of which we read aloud.  We also found some good extensions for the project in here for once we finished all the suggested avenues in Partnership Writing.

We did two that I thought were worth sharing.  First, I left the kids a message in cipher for them to find in the morning, along with several clues on how to solve it.  It told them where to find special strawberry muffins.  Since this was basically a cryptoquote, I left the book open to a page with this information about the most common letters, short words, double letters and so forth in English.  It took them a long time, but they did decipher it.  I was really proud of their persistence.  And while it was a tough activity and not for every kid at this stage of writing, I thought it involved a lot of good language thinking.  Enough that we might try it again with another baked good and a new hiding place at some point. 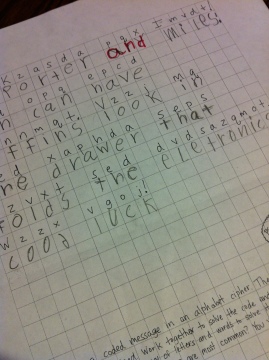 Next, after doing a book cipher that was suggested in Partnership Writing, we took it to another level by writing the plain text ourselves.  Mushroom and BalletBoy each came up with a message to hide in a letter.  They wrote the letters and scattered the words for the secret message inside them.  I helped them edit for spelling, then we typed them up.  Then, they carefully cut out a special key for reading the letter.  When you lay the key on top of the letter, it reveals the secret message with carefully cut out holes.

To create the key, I printed two copies of the letter in a nice, large type.  The first one was set aside.  The second one was taped to a sheet of blank paper that would become the key.  We used an x-acto knife to cut out the words of the message from the letter.  When we separated the letter copy from the blank paper, the blank paper became the key and the cut up letter went to the recycle bin.

We never do anything quite the way it’s proscribed, so we didn’t follow the routine in Partnership Writing to the letter.  However, we had a blast.  We’ll take a week or so off and just continue our routine of dictations, poetry teas, narrations, and reading then dive into the next project.